The start of the fall season got moving with gusto as both choruses swung into full action. This season the Men of the Tay are meeting at PDCI on Monday evening and the Women of the Tay are meeting at St. John Catholic High School on Wednesday evening. Both rehearsals start promptly at 7:00 PM and are over in time to clear the buildings by 9:00 PM.

Over 26 men returned to the Men’s chorus for their 6th season, and over 40 women are taking part in the inaugural season for the Women’s chorus. Both choirs have a full fall season of rehearsals and appearances, culminating in a Christmas Concert to be held on Wednesday, December 10th at 7:30 PM at St. James the Apostle Anglican Church. 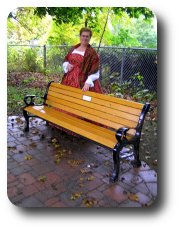 Adding to the special things this fall, the Central Playground was officially opened on Saturday, September 27th. Many wil remember that the Men of the Tay raised in exess of $1600 to place a special bench in the playground. The bench, placed “In honour of members of the chorus whose harmony is now missed” is located at the east end of the Mill Street park under a tree and beside the Tay River. It is a fitting tribute to all who have been part of the organization since that first season and who for reasons of passing or moving on have left the chorus.

We are all sadder but richer for their time with us.

The Men of the Tay meets each Monday evening, from 7:00 to 9:00 PM in the music room at Perth & District Collegiate Institute. Under the direction of Shelley McLaren, the choir performs a wide variety of music from classical to contemporary and is open to any male singer without audition. The choir meets from September to June each season and there are no fees charged to be a member. Each year the choir sings at numerous community events and fund raising activities.

The Women of the Tay is a new chorus for the female singer. The choir will rehearse each Wednesday evening in the music room at St. John Catholic High School from 7:00 to 9:00 PM and is being led by Shelley McLaren. The first rehearsal will take place on September 10th and continue each week through to June. The choir will perform a wide variety of music including classical and contemporary selections written especially for the female chorus. Auditions are not required and no fees are charged to be a member.

Questions? Give us a call or check out our Frequently Asked Questions (F.A.Q.) page on this website.